In this age of YouTube sensations and the surprisingly ubiquitous “I’ll meet you on Facebook,” it can’t come as much of a surprise when social media, our contemporary public forum, crosses paths with the original public form, politics.

When it comes to advocacy and activism, we have laid down our picket signs in favour of hashtags (#), and write our scathing (and hopefully still rhythmic) slogans to fit into 140 characters or less.

This bleeds into other areas of our lives, too. Nowadays, when we encounter a beautiful landscape, we don’t sit back and admire, we add it to our Mobile Uploads on Facebook. When a view of the night sky makes us ponder our insignificance, we don’t write nihilistic poetry to be celebrated after our death, we tweet about it.

I’ll admit that the speed at which information can be shared — and the extent — presents a promising possibility for communication between grassroots organizations and their campaigns. But if all our effort goes into maintaining our online lives, we’ll end up with a generation of kids that would rather “like” something than really fight for it.

Political activism has become superficial and trendy, just another thing to change on our Timeline. For example, Kony 2012, the 30-minute video produced by Invisible Children, Inc., took about a month to live out its internet sensation lifecycle (last week famous, this week infamous and next week not as interesting as the latest lolcat).

What is most concerning about the dramatic take- off and then crash-and-burn of the campaign is the collateral damage it has caused in its downfall. These are losses I think we should be mourning.

I don’t mean the ‘invisible children’ that the campaign was supposedly concerned with; I mean all of the Ugandan politicians, activists and community organizers whose work was made invisible to the international world by the Kony campaign. The campaign implied that there is no active effort on the part of the Ugandan people to protect themselves from the dangers of war, or to develop and maintain sustainable resources. This is simply untrue. There are a number of organizers in Uganda working to provide the kind of resources and services that the Kony 2012 video would make you think are nonexistent. Plus, the video inaccurately represented both the Lord’s Resistance Army and the Ugandan Army, painting a portrait that more closely resembled a Uganda from several years ago. Uganda is not currently perfect and we shouldn’t forget about it, but when it comes to activist efforts we have to ensure that we don’t discount the work of local initiatives in developing countries. It is imperative to ensure that we understand the realities and history of a situation if we are trying to get involved.

The work that Kony 2012 advocates is the opposite of work. It is buying bracelets and ‘liking’ links and nothing that promotes peaceful development in Uganda. The end-goal of the campaign is to maintain a US military presence in Uganda, and you are wanted to help achieve that by doing a whole lot of nothing. Call me nostalgic, but I almost miss the misinformed appeals of World Vision campaigners at my door. At least they knew how to pound the pavement!

Young people now are required to do no legwork, no research. Who needs to read when campaigns like this one are clogging up your News Feed? People don’t have to bother learning about Uganda and its history; there is a ready-made video telling them what to think and who to support (or not support). This is a huge problem for the next generation, who are going to grow up on a diet of YouTube videos and slacktivism and no critical thinking skills.

He got a lot of flack for the Kony 2012 video, and justifiably so. But when he showed up on the streets of California naked, the rumours of drugs, alcohol and public masturbation went just as viral as the image of his young son discussing military leader Joseph Kony. As much as I think his video was extremely problematic — more a hindrance than a help to Uganda — I can’t help feeling bad for the guy. What is the lesson here kids? Do your homework before you produce a tear-jerking documentary starring your own child and a token African orphan that you put online, or be prepared to face a wave of international criticism.

The final word here is: read. Be critical. Social media, that is, Facebook, Twitter, YouTube and all the powers that be of the World Wide Web, are extremely potent and powerful tools for the dissemination of information. They are great because they are so accessible. With enough friends or followers you don’t need official airtime to spread a message, you just need a few clicks of a mouse.

But, because anyone can easily share the words and images that support their views, we need to be increasingly critical of what we are consuming. I don’t just mean actually checking if the references in a Wikipedia article are legitimate, I mean doing a bit of real research when you hear about something that might be a real concern. 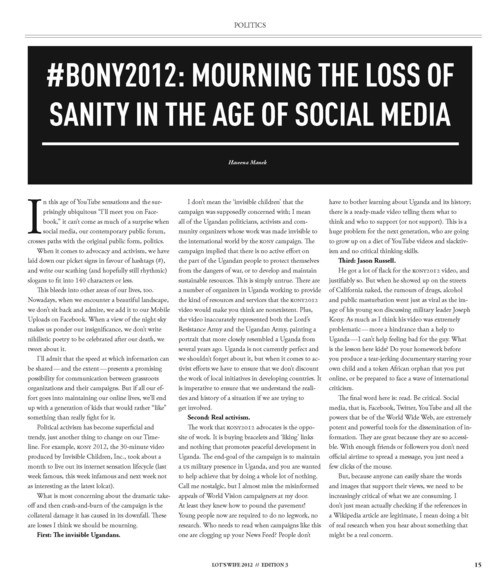 View all posts by Haseena Manek